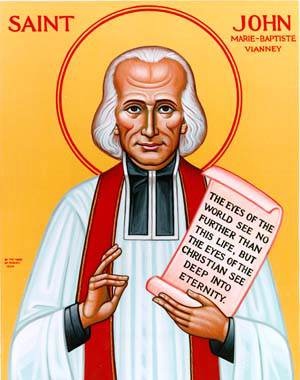 Yesterday was St. Jean Marie Vianney’s feast day. I had intended on posting this on his feast day but, as so often happens, other things got in the way. Below is part of a short biography – the rest of which can be found here.

St. Jean Marie Vianney (1786-1859) was born in a time of intense persecution of priests in revolutionary France. As a child, his parents helped to hide faithful priests and took their children to secret Masses in old barns and private homes. The young Jean Marie showed an extraordinary piety and love for the blessed Mother…Finally, at the age of 19, his father allowed him to study with a holy priest, Fr. Balley, who had survived the time of persecution. Yet, Jean Marie was already much older than his classmates and had great difficulty learning Latin. Later, after a brief and unsuccessful time in the seminary, he was allowed to complete his studies with his priest-mentor. Having failed twice in his examinations, he was finally allowed to take the examination in the supportive presence of Fr. Balley, and this time succeeded.

From the little that I know about St. Jean it appears that he knew early in his life what he was called to do – he knew he was to be a priest. Even though various circumstances kept him from pursuing the priesthood as early as he would have liked, he never gave up on God’s call for his life. And even through all the struggles he had in his studies and failing his examinations twice he still did not give up. When it appeared that everyone had given up on him, he did not give up on God’s call for his life.

But, in contrast to St. Jean Vianney’s life, let us consider the lives of those who do not hold fast to what God is calling them to do. I will explain what I mean by an example from my own experience. In a similar fashion to St. Jean, early in my own life I too felt called to some form of ministry within the Church. Although, I had no idea what that meant for my life because, at the time, I was Baptist and definitely did not feel called to be a Baptist ‘preacher’ (which is term we used instead of pastor). But because of this general sense of a vocation that I had, I assumed from an early age that I would one day go to seminary. And in preparation for seminary, once I entered my second year of college I started to study philosophy.

Now, when you are in college it is typical for people to ask you what you are studying. And whenever I was asked that question and responded, “Philosophy” I would commonly get responses like these: “What on earth are you going to do with that degree?” or “Can you make any money with a such a degree?” And even after I explained I was planning on going to seminary many people would still have a disapproving look on their face because of my choice of studies. Such are the dangers of pursuing what you feel called by God to do I suppose.

But eventually that whole mindset got to me – the pragmatic mindset that questions the value of the search for truth and the acquiring of knowledge simply because it has nothing practical to offer. This was part of the reason that I eventually stopped studying philosophy in college. (Although there were also other factors that led to my leaving the study of philosophy.)

Looking back at my life I can say that the point at which I stopped studying philosophy coincides with the point at which I started to lose the sense of a call from God; in other words, I lost my sense of purpose. This is evidenced by the fact that, after that point, I started little by little to lose any sense of direction in my life – I did not have any idea of what I was supposed to do or even of what I wanted to do. During this time I was just the same as the man who had been given one talent by his master but, instead of doing anything with it, he went and hid it in the ground. (Matthew 25:18) But of course we mustn’t hide our talent in the ground because we know what will happen to us if we do: we will be “cast…into the outer darkness (where) men will weep and gnash their teeth.” There is a question that may be asked, though: why is the punishment so harsh for not using the ‘talent’ that God gives you?

The answer to that question can be found in the following quote:

The Radiance of Being p.174-5, by Stratford Caldecott

Christians know that God created mankind in His own image. We also know that God loves us. But we need to truly understand and believe these things, and the implications that come from them, if we are to understand the Parable of the Talents and the reason why we should not waste time as I did earlier in my life. We need to understand that God knows us and loves us as we ‘will be’ at the end of time – without all the sin and attachment to sin that we now suffer from. Yes, of course he loves us as we are right now, but how we are right now is not good enough! Jesus revealed to us the need to be perfect and that is what God expects from us. And in order to arrive at the destination of what we ‘will be’ at the end of time we must start our journey right now. Who we are here on this earth is intimately tied to who we ‘will be’ at the end of time. And our perfection then will reflect back to God something that no other creature will be able to duplicate. Out of His infinite love God desires for each of us to reach that perfection that already exists in His mind and that is why He is never satisfied with how far we progress here on this earth.

And it is that point that brings up a crucial difference between the life of St. Jean and my own life. St. Jean never ceased pursuing God’s plan for his life, although it may have been delayed by things out of his control. But I did leave God’s plan for my life behind, at least for a while. And I would imagine that there are many other people that have done the same thing in their own lives. And if that is the case for you as it was for me then bring to mind the Parable of the Laborers in the Vineyard. In that parable there were many throughout the day that the owner of the vineyard noticed just standing around and doing nothing. And throughout the day the owner came back to these directionless and lazy people over and over again imploring them to go work: in other words, to put their talent to use. Some of them were like St. Jean – they immediately went out at the first part of the day when they were called. Others, like myself, were lazy and waited until much later. And why do we do that? Perhaps because we despair of ever being able to complete the task we have been assigned.

But just because we cannot reach that perfection that is expected of us here on this earth does not mean that we should just give up and wait around, doing nothing. The lessons we learn from the parables of the talents and the workers in the vineyard gives us proof. If we just sit on the sidelines of this life and don’t use that which God Himself has given to us then we are telling Him with our actions (or lack thereof) that we do not love Him. God created us to know and to love Him but we will never know or love Him unless we strive with our entire being to seek Him out. And our very being includes that special talent that God has given to each and every one of us. And from the Parable of the Laborers in the Vineyard we know that if we will heed the call of our Lord to go and work – to put to use that talent He has given us – then even if we do so at the end of the day we will receive our reward from Him.

In imitation of St. Jean Vianney, it would have been much better for me to immediately go into the vineyard and start doing the work God has called me to do. Nevertheless, I thank God that even though I gave up on Him during part of my life, He never gave up on me. There is so much time that I wasted, which I truly lament. And as a result of that wasted time there are things that I should have learned years ago that I am only just now discovering. But I let that loss spur me on to do right now what I can to fulfill that which God has called me to do. To do so is to begin to become what I ‘will be’ and in fact what I already am in the mind of God.