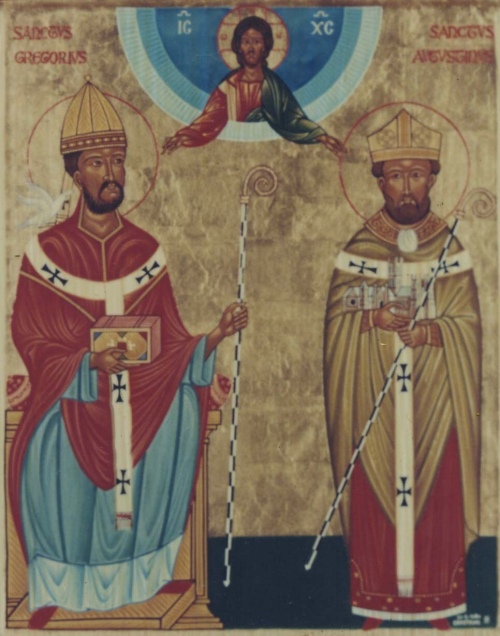 St. Gregory the Great and St. Augustine of Canterbury

Perhaps you have heard this story before but not perhaps from St. Bede the Venerable. This passage starts on page 86 of the pdf, which is numbered 74 in the text of the book. The whole book can be found here for free.

Nor must we pass by in silence the story of the blessed Gregory, handed down to us by the tradition of our ancestors, which explains his earnest care for the salvation of our nation. It is said that one day, when some merchants had lately arrived at Rome, many things were exposed for sale in the market place, and much people resorted thither to buy: Gregory himself went with the rest, and saw among other wares some boys put up for sale, of fair complexion, with pleasing countenances, and very beautiful hair. When he beheld them, he asked, it is said, from what region or country they were brought? and was told, from the island of Britain, and that the inhabitants were like that in appearance. He again inquired whether those islanders were Christians, or still involved in the errors of paganism, and was informed that they were pagans. Then fetching a deep sigh from the bottom of his heart, “Alas! what pity,” said he, “that the author of darkness should own men of such fair countenances; and that with such grace of outward form, their minds should be void of inward grace. He therefore again asked, what was the name of that nation? and was answered, that they were called Angles. “Right,” said he, “for they have an angelic face, and it is meet that such should be co-heirs with the Angels in heaven. What is the name of the province from which they are brought?” It was replied, that the natives of that province were called Deiri. (Note: Southern Northumbria) “Truly are they Deira,” said he, “saved from wrath, and called to the mercy of Christ. How is the king of that called?” They told him his name was Aelli;’ and he, playing upon the name, said, “Allelujah, the praise of God the Creator must be sung in those parts.”

Then he went to the bishop of the Roman Apostolic see (for he was not himself then made pope), and entreated him to send some ministers of the Word into Britain to the nation of the English, that it might be converted to Christ by them; declaring himself ready to carry out that work with the help of God, if the Apostolic Pope should think fit to have it done. But not being then able to perform this task, because, though the Pope was willing to grant his request, yet the citizens of Rome could not be brought to consent that he should depart so far from the city, as soon as he was himself made Pope, he carried out the long-desired work, sending, indeed, other preachers, but himself by his exhortations and prayers helping the preaching to bear fruit. This account, which we have received from a past generation, we have thought fit to insert in our Ecclesiastical History.

The Ecclesiastical History of the English People, St. Bede

I have always thought this to be a wonderful story. I suppose the main reason I find this story so intriguing and inspiring is because it led to the salvation of the English people, which is very important for me as an Anglican convert to the Catholic Faith. But of course there would be no ‘Anglican’ if St. Gregory had not first sent St. Augustine, which eventually led to Anglicanism after Henry VIII. So it is very appropriate that as Gregory sent Augustine to preach the Catholic Faith to the people and bring them into the one Fold of Christ, so also Benedict XVI published Anglicanorum coetibus to bring the lost sheep of Anglicanism back into the one Fold originally proclaimed by Augustine.

But there is another reason I am bringing up this story today. Notice what happens when Gregory sees the Angles being sold in the marketplace. His immediate and primary concern is not to see the slaves freed from their physical chains that hold them down. Instead, he is focused on another slavery that is far worse – that of being pagans, of being completely and hopelessly lost without a knowledge of Christ. It was the chains that enslaved their souls that he sought to free them from because it is those which have eternal consequences.

Many people today though have it completely backwards. They might see physical chains of some sort, some form of ‘social justice’ that needs to be performed, and through mere sentiment they seek to put right the perceived wrong. But of the spiritual situation of those in need they could not care less. This mindset is at least understandable in relief work done for the needy through various non-sectarian agencies. But when this is the attitude of those within the Church it makes no sense whatsoever!

Our Lord died to bring eternal, not temporal, salvation to mankind. This isn’t to say that we should not be concerned with the physical needs of our suffering brothers and sisters. We should – in fact our Lord demands it of us. But, we must have our priorities straight and remember that the help that others need most desparately, more than anything else, is not ‘justice’, whether it be social or otherwise. Instead what they need is mercy – the mercy that we can only receive through Christ’s redemption that He won for us on the Cross. St. Gregory understood this and we, as a Church that can see pagans of all kinds surrounding us, need to understand it.

The quote below is from an article by Fr. Dwight Longenecker and can be found in its entirety here. The whole thing is worth reading.

Emotivists contend that words which suggest an objective morality like “good”, “bad”, “right”, “wrong”, “should”, “ought” have no basis in reality. They are merely the emotional expressions of the speaker and that he uses these words to bully someone else to do what he wants. It’s called “boo-hurrah” morality because the morality consists of nothing more than one person saying, “Hurrah! to this” or “Boo! to that.” Morality is thus reduced to “It’s right because I said so loudly” or “It’s wrong because I objected loudly.” Emotivism excludes social, historical, cultural, spiritual, and religious considerations from the discussion of morality.